President Trump denounced an op ed published by The New York Times in which an unnamed senior administration official wrote that his erratic and unstable behavior is being restrained by a “quiet resistance” within the White House team.

Trump called the piece a “gutless editorial,” noting its anonymous writer, and called its publication a “disgrace.”

“We have somebody in what I call the failing talking about he’s part of the resistance within the Trump administration,” Trump said, as he met with a group of sheriffs. “This is what we have to deal with. And you know, the dishonest media … it’s really a disgrace. I will say this: Nobody has done what this administration has done in terms of getting things passed, in terms of getting things through.”

He then tried to run through what called the administration’s successes.

“Nobody has ever done in less than a two-year period what we’ve done,” he said. “So when you tell me about some anonymous source within the administration, probably who’s failing, and who’s probably here for all the wrong reasons.”

He then tweeted out a video of his reaction, followed by one tweet that simply asked, “Treason?”

White House Press Secretary Sarah Huckabee Sanders said, in a statement, “The individual behind this piece has chosen to deceive, rather than support, the duly elected President of the United States.  He is not putting country first, but putting himself and his ego ahead of the will of the American people.  This coward should do the right thing and resign.”

Very quickly after the op-ed was posted on the Times website on Wednesday afternoon, D.C. plunged into a guessing game over the identity of the administration official, who used the pronoun “he” in a tweet, indicating that the writer is male.

“Given the instability many witnessed, there were early whispers within the cabinet of invoking the 25th Amendment, which would start a complex process for removing the president,” the author wrote . “But no one wanted to precipitate a constitutional crisis. So we will do what we can to steer the administration in the right direction until — one way or another — it’s over.”

Erick Erickson, the conservative commentator, wrote that “a dear friend of mine who works for tells me he loves the guy, but that they all spend an inordinate amount of time stopping his worst impulses. He says he feels deeply betrayed by this op-ed because it will hurt all of their efforts to help the President do right.”

Anthony Scaramucci, the former White House communications director, wrote on Twitter that “I said in July 2017 in my short tenure [at the White House] that there were forces inside the building that were “saving the country” from POTUS. Imagine the ego of that and the cowardice anonymity.”

Trump’s team already is dealing with the fallout of the release of excerpts from Bob Woodward’s new book “Fear,: Trump in the White House,” set to be published on Tuesday, and has tried to undermine its credibility by releasing statements from Chief of Staff John Kelly and Defense Secretary James Mattis in which they deny making certain quotes attributed to them. The book reportedly portrays the president as erratic and out of his depth.

“The book means nothing. It’s a work of fiction,” Trump told reporters. He repeated the phrase “work of fiction” multiple times throughout the day.

The author of the piece is known to New York Times’ opinion editors. That even puts the paper’s editorial side in an unusual position.

“So basically: Times reporters now must try to unearth the identity of an author that our colleagues in Opinion have sworn to protect with anonymity?” wrote New York Times investigative reporter Jodi Kantor.

The Times Op Ed only added to what has been a busy, chaotic and surreal day in Washington. On Capitol Hill, the Senate was facing the second day of confirmation hearings for Brett Kavanaugh to the Supreme Court, with protesters continuing to interrupt the proceedings.

In a nearby building, Facebook COO Sheryl Sandberg and Twitter CEO Jack Dorsey testified before the Senate Intelligence Committee. Just outside the hearing room, Alex Jones sparred with Sen. Marco Rubio (R-Fla.). Later, as Dorsey testified before a House Energy & Commerce Committee hearing, a woman, identified by multiple news outlets as activist Laura Loomer, started to interrupt that hearing as well. But Rep. Billy Long (R-Mo.), a former auctioneer, then took over the microphone and began to rattle off queries for bids.

Update: Trump said that The New York Times must identify its source for “national security purposes.”

A spokeswoman for the Times said in a statement, “We are incredibly proud to have published this piece, which adds significant value to the public’s understanding of what is going on in the Trump administration from someone who is in a position to know.” 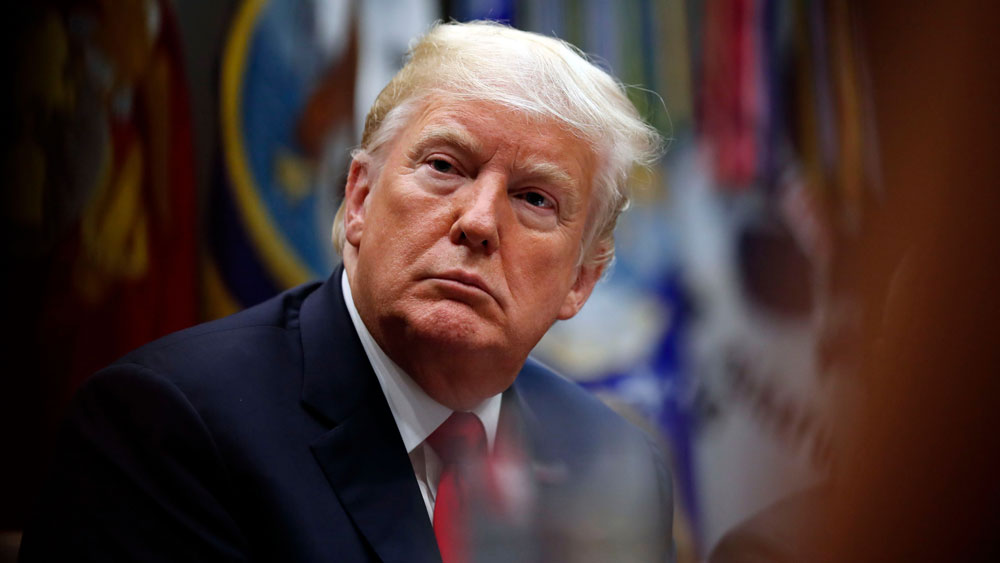